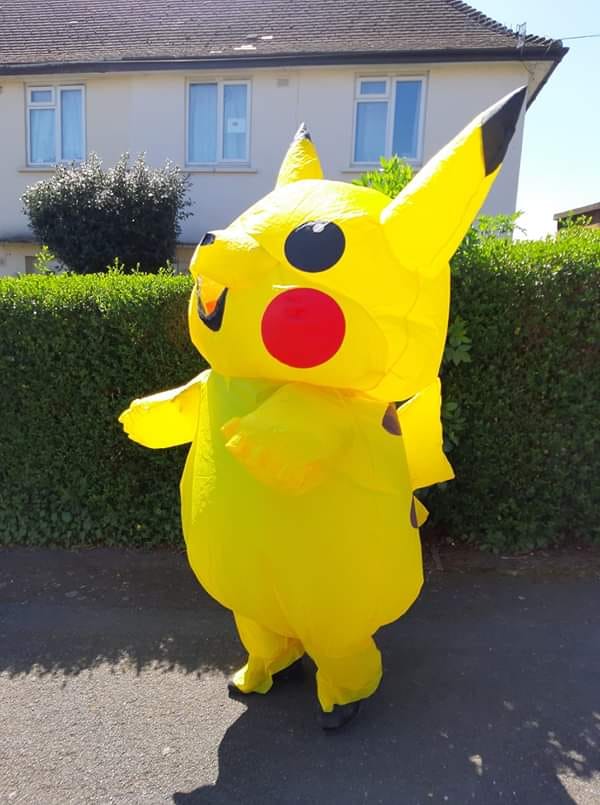 Posted on October 19, 2020 Comments Off on Stacey’s Heroes Are Rewarded For Going The Extra Mile in Lockdown

A mum who dresses as a giant Pikachu and a legal assistant who took VE Day celebrations to hundreds of people’s homes are among the winner’s of a bakery’s competition to recognise those who went above and beyond during lockdown.

Stacey’s Bakery, which has branches in Ilkeston, Eastwood and Heanor, held a lockdown hero contest to reward the efforts of pillars of the community who went the extra mile amidst the Coronavirus pandemic.

After nominations flooded in, four worthy winners were chosen to each receive a £100 voucher to spend in Stacey’s shops.

Leighanna Henshaw, a mum-of-five, dressed as Pokemon character Pikachu and walked around the streets near her home in Cotmanhay over a period of four weeks, bringing a smile to the faces of local youngsters.

The 32-year-old raised around £400 through bucket collections and socially-distanced bake sales for hand cream and personal protective equipment for staff at Ilkeston Community Hospital and local care companies.

Leighanna, who is married to Mick, said the idea started when she decided to dress as the cartoon character for her friend’s twins’ second birthday in March, when she knew they couldn’t celebrate as they would have liked.

From there, the ‘Pop Up Pikachu’ idea began, and a Facebook page of the same name was created, encouraging local children to post pictures with Pikachu and guess the location, and they could make requests for Pikachu to visit their streets.

Leighanna, who bought her suit for her son’s fancy dress birthday party last year, also wore the suit for VE (Victory in Europe) Day to put a smile on people’s faces.

She said: “I loved dressing as Pikachu, but it was very hot inside the suit. I had to have my friends John Allen and Jo Plackett accompany me in it.

“It feels great to get this recognition.”
She thanked her mum, Trina Walker, for babysitting while she carried out her Pikachu charity efforts.

Also picked as a winner was Lindsey Rice, a 47-year-old mum-of-one.

Lindsey co-founded the Every One Eats charity, which provided 90 residents with Christmas lunches last year, with Reverend Christine French, of All Saints Church, Kirk Hallam.

When VE Day celebrations couldn’t be held on the church driveway, Lindsey took the party to residents’ homes, delivering food bags to 300 people.

Thanks to a grant from Tesco, Lindsey and her husband, Paul, a self-employed cleaner, were able to repeat their deliveries monthly, with up to 600 people benefiting most recently.

Lindsey, who along with her husband also set up a foodbank using local donations and makes several deliveries a week, also had to carry out the work of three people at the legal firm where she works in Ilkeston, when colleagues were furloughed earlier in the year.

Lindsey, who organised activities including curry nights and bingo on Saturdays at the start of lockdown, said: “It’s brilliant to have been nominated, it’s quite overwhelming.”

Another winner is Andie Welsher, 48, who during lockdown made over 200 sets of scrubs for the NHS, whilst also looking after her elderly mum.

The Ilkeston resident also lost her three jobs because of the Coronavirus, and suffered whiplash in a car accident recently, but continues to do her father’s shopping and go to work, despite needing physiotherapy.

The final winner is Diane Rowley, of Newthorpe.

She is founder/chairperson of Eastwood Memory Cafe, a not-for-profit group supporting and arranging activities – including online Zoom bingo in lockdown and weekly well-being calls – for people living with dementia, and their carers.

She also set up the mutual aid group ENGMA for Eastwood, Newthorpe and Giltbrook and worked tirelessly recruiting people to help with shopping and other errands for the vulnerable in her community.

David Stacey, managing director of Stacey’s Bakery, said: “We had so many nominations for people who have gone above and beyond during the pandemic, that it was hard to choose just four.

“We have been part of the community for around a century and are proud of the people we serve, and this competition has helped to unearth some real gems living in our local area. “We’re honoured to be able to offer this little treat to the winners.”

To find out more, visit www.staceysbakery.uk