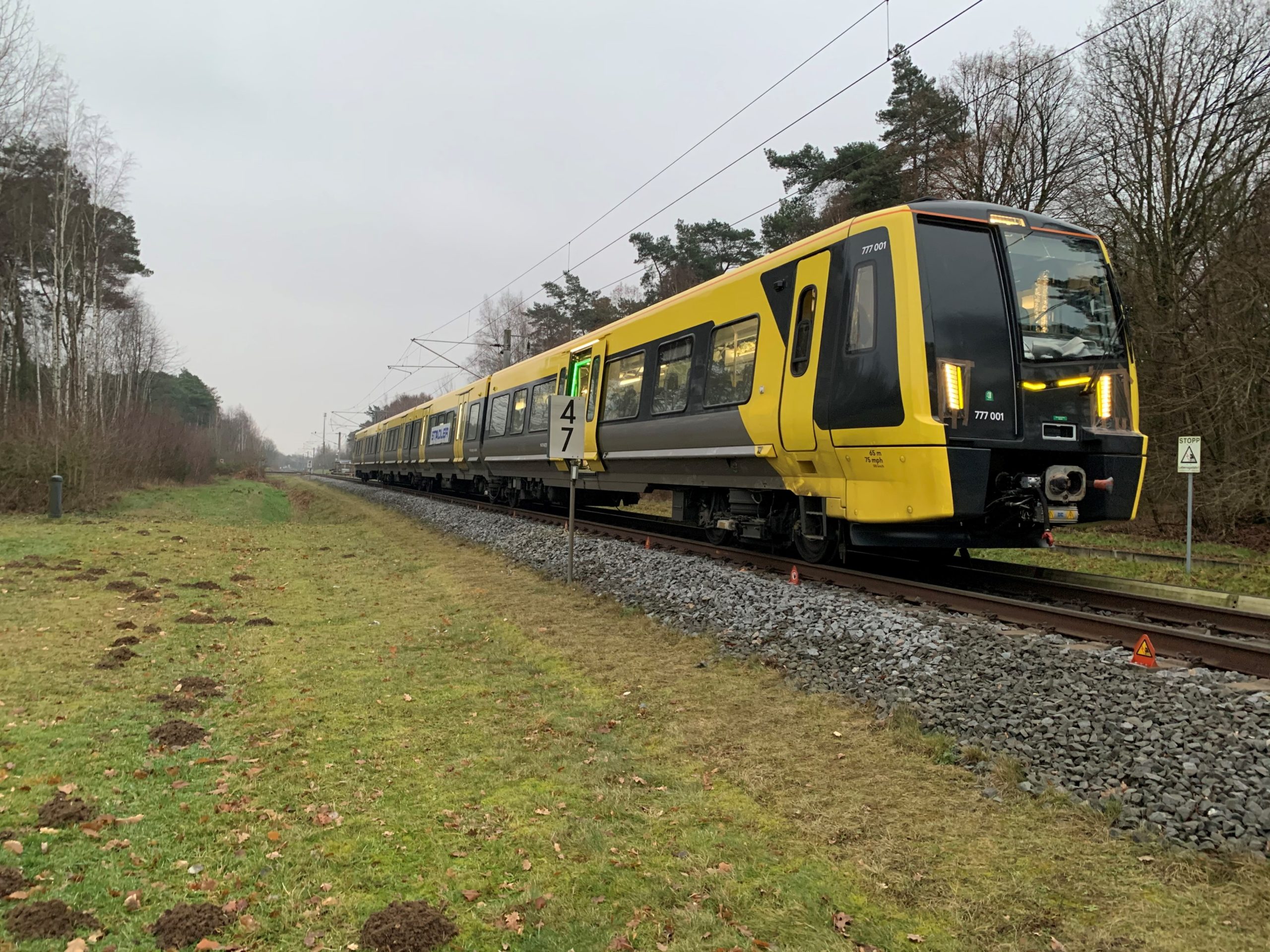 Posted on February 10, 2020 Comments Off on Serco Rail Technical Services awarded contract by Stadler Rail for testing of the new Merseyrail EMU fleet of trains

Serco’s Derby based Rail Technical Services (SRTS) has been awarded a contract by Swiss rolling stock manufacturer, Stadler Rail, to undertake a programme of testing services for the new fleet of trains for the Merseyrail network.

Stadler Rail is delivering a fleet of 52 EMU (Class 777) trains, including ongoing maintenance services for Merseytravel. Once testing is complete later this year, the fleet will be rolled out gradually over the course of 12 months. SRTS are undertaking type testing activities at the Wildenrath test track in Germany and at the new Liverpool Kirkdale depot operated by Stadler Rail Service UK. SRTS engineers have delivered and fitted instrumentation to the first unit and are carrying out a range of tests including dynamic ride performance, Electromagnetic compatibility (EMC), braking, Wheel Slide Protection (WSP) and noise. This involves working as an integrated team with Stadler to a tight schedule, including collection and analysis of test conditions and results to support system verification and validation.

Of the recent success with Stadler, Richard Hobson, Director, SRTS said, “Serco is delighted to be supporting Stadler during a critical project phase in the introduction of their fleet being funded by the Liverpool City Region Combined Authority, which will ensure that the investment in new rolling stock for the Merseyrail network delivers safe and reliable trains for the benefit of passengers in the Liverpool City Region. SRTS are pleased to be assisting new train manufacturers such as Stadler Rail becoming established in the UK rail market and developing a reputation for high quality, dependable rolling stock.”

Merseytravel’s Programme Director Rolling Stock David Powell, said: “The new fleet will transform how people travel. We are delighted to have reached this significant milestone and are now able to test our state of the art trains on the network to ensure they are ready for passenger service.”

Andy Heath, Merseyrail’s Managing Director, said: “This is yet another step towards bringing new trains to the Merseyrail network and the people of the Liverpool City Region, and we are looking forward to working closely alongside Serco Rail Technical Services to ensure the trains operate safely and effectively.”

About Serco Rail Technical Services (SRTS): SRTS is part of Serco’s Transport business, which operates various transport services around the world (primarily rail but also air, sea and road related). A specialist provider of Rolling Stock Testing & Commissioning (T&C) and technical assurance services, it is uniquely placed to provide a deep technical and practical insight into GB railway operations, having originated from the British Railway testing and development division in the mid-1990s. Today it has over 50 years’ experience across a broad range of rolling stock and infrastructure technical services through the rolling stock development lifecycle. SRTS provides engineers at client depots and routes across the GB rail network and since 2006 has developed and operated the UK’s main test track at the Rail Innovation & Development Centre (RIDC) Melton, initially for London Underground and latterly on behalf of Network Rail. It works closely with train manufacturers to successfully deliver extensive and complex rolling stock testing programmes at this site and other worldwide test tracks and depots.

About Merseyrail: Merseyrail is the train operator responsible for the operating passenger services in Liverpool and the surrounding Liverpool City Region. It is a 50/50 joint venture between Serco and Abellio, as part of a 25 year franchise from 2003 to 2028. It has been the most punctual train operator in the country for two years running.

About the Combined Authority

The fleet of state-of-the-art trains is being funded by the Liverpool City Region Combined Authority for the Merseyrail network, on behalf of the 1.6million city region residents.

£500m is being invested in bringing the new trains to the Northern and Wirral lines, which will help connect people and places across the Liverpool City Region,  boost the local economy and create more than 1000 new jobs.

About Stadler: Stadler is an international rail-builder, headquartered in Bussnang in Eastern Switzerland. It is supplying the new METRO trains for the Liverpool City Region and has a 35-year contract to service and maintain Merseyrail trains. This started in 2017 with the legacy fleet. Stadler is delivering trains for three other UK clients: Strathclyde Partnership for Transport in Glasgow, Abellio East Anglia and Transport for Wales.