Posted on September 4, 2019 Comments Off on Russells Roots for Burton Albion FC 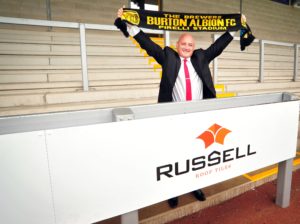 Following three seasons of successful sponsorship, the roofing tile manufacturer is once again sponsoring the East Stand for an undisclosed sum, as well as working closely with the club on both charity and corporate initiatives during the 2019/20 season.

Burton Albion, also known as the Brewers, is led by manager Nigel Clough (son of the famous Brian Clough). The East Stand is expected to welcome thousands of visitors this season as BAFC take on other teams in League One such as Sunderland, Coventry City and Portsmouth.

Russell Roof Tiles employs 100 staff at its two sites on Nicholson Way and Wetmore Lane in Burton, and has always been dedicated to supporting the local community and the sports clubs within it. Over the years, Russell Roof Tiles has built an excellent relationship with the club, including taking part in the Burton Albion corporate 5-a-side charity match earlier this year, and hosting Christmas parties and corporate events at The Pirelli Stadium.

“What started as a straightforward sponsorship has developed into a great partnership in which we can support grassroots football, raise money for charity, and enjoy supporting the team at matches.

“Taking part in the corporate 5-a-side was great fun for our staff members, although it doesn’t look like they will be called up to the first team any time soon! We look forward to another fruitful year.”