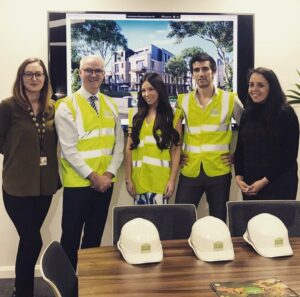 An award-winning public relations agency has cemented its reopening with another strong partnership, after a top house-building firm became its latest client.

Nottingham-based Peter James Homes is the latest signing for Poppy PR, which is headed up by Tina Clough and is celebrating 10 years in business.

The Poppy PR team will be providing the developer with traditional PR services, including press releases, as well as helping to coordinate its social media presence and boosting community relations.

It adds to the PR team’s impressive experience of working with other high-ranking firms in the construction and property sector, including Derby-based Hodgkinson Builders and Access Training, as well as Nottingham developer ALB Investments.

Bosses at Peter James Homes were impressed with a one-off job Tina carried out for them over the Christmas break, despite Tina finishing for annual leave, which produced a fantastic result.

Tina, who set up the business in 2010 and was awarded the Young Achiever of the Year accolade at the English Women’s Awards in 2018, said: “We have developed quite a good reputation as experts when it comes to construction and property PR, whether that’s for those building homes and commercial property or estate agents wanting to market their services, alongside clients in other sectors, ranging from bakeries to manufacturing firms.

“We are absolutely thrilled to have signed up Peter James Homes, which has a stunning portfolio of housing developments throughout the East Midlands.

“I helped with a media response for the company over Christmas and the Peter James Homes team was impressed. It was a pleasure to help then and it’s an honour to form an official ongoing partnership.

“We can’t wait to get cracking on promoting their fantastic work and achievements, including some stunning developments.”

The agency continued to work during the Covid19 crisis, but did so from home. This week marks its official return to the office.

The new relationship is a logical step for Peter James Homes, which is based in Toton and is part of the McCann Group, as it bids to spread the word about its ongoing and forthcoming developments.

These include Hunters Wood, which consists of 14 luxury homes in Gedling; 34 elegant apartments and penthouses at its Riverside, West Bridgford development and 148 quality new homes at Woodland Heights in Bullbridge, near Crich, Derbyshire.

Other schemes from the Peter James Homes team include Kings Park in Bestwood, Pentrich Fields at Giltbrook and Kingston Meadows at East Leake.

Peter James Homes boasts over 50 years of civil engineering excellence and provides unique, designer homes which are built to last a lifetime.

He added: “Poppy PR were contacted following recommendations from both William H Brown and the Wilkinson Group.

“At our introductory meeting we were equally impressed with their network of contacts and direct association with regional publications.”

For more information about Poppy PR call 07851 015325 or email poppyprteam@gmail.com.