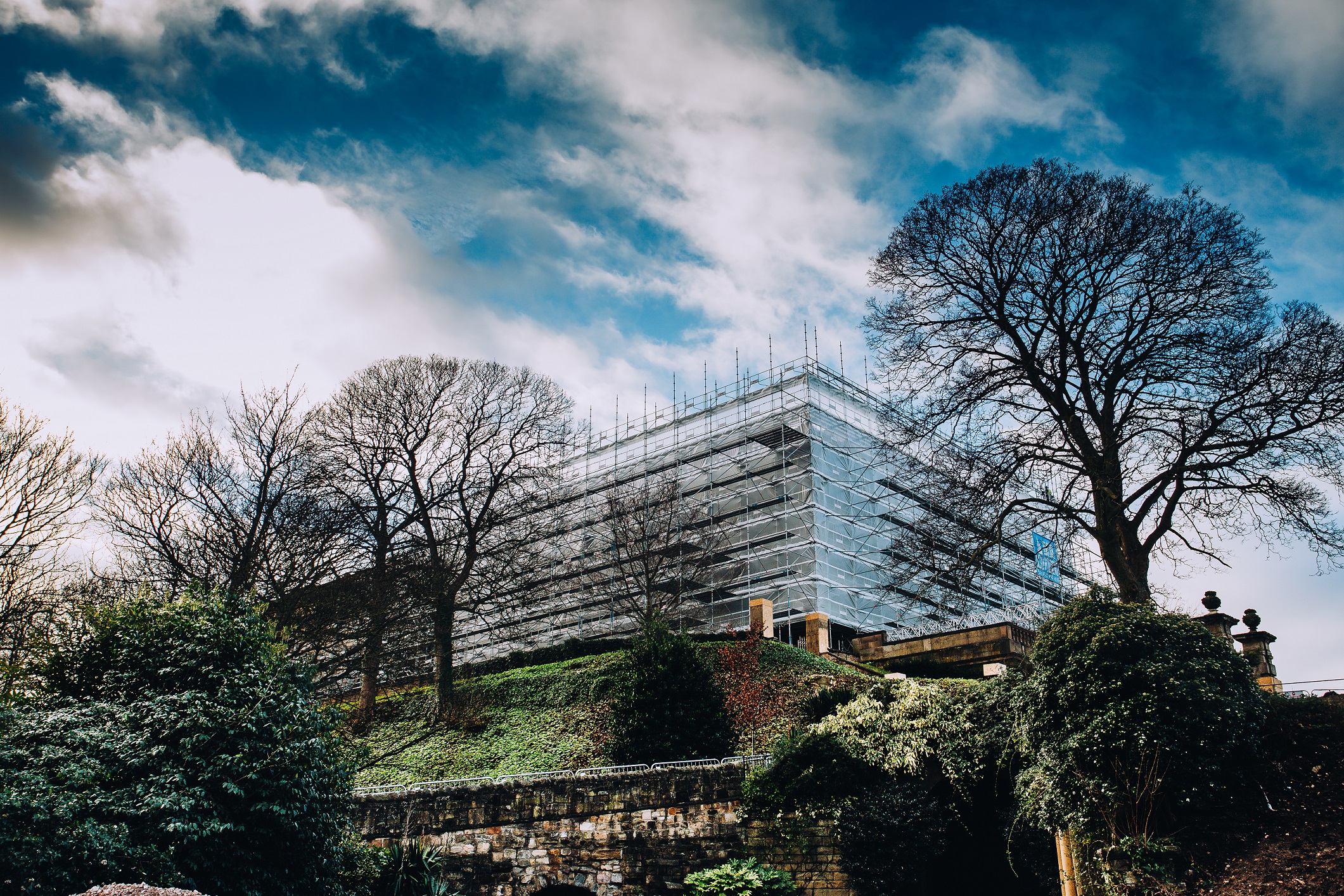 Posted on February 28, 2020 Comments Off on Major milestone for Nottingham Castle renovation as 15km of scaffolding is removed

Significant renovation works at Nottingham’s famous landmark, the Ducal Palace, are progressing well and 15km of scaffold tubing has now been removed to make way for the next stage of restoration at the historic site.

G F Tomlinson was appointed by project lead Nottingham City Council due to its established history of delivering heritage sector projects across the region. The project includes creating a new state-of-the-art visitor centre and a new extension to the Ducal Palace, where brand-new Robin Hood and Rebellion galleries will be created to celebrate Nottingham’s most famous outlaw.

Works to the Palace until this point have involved stripping back and returning the site to its original 1870s state, including the removal of the roof following a number of modifications since the 19th century. The original Ducal Palace building burnt down in 1831 and was rebuilt in 1875 and later opened as a gallery in 1878.

To protect the iconic Ducal Palace, the building was covered in a temporary roof and surrounded by innovative freestanding scaffolding around its structure, balanced by water butts. Due to the delicate nature of the project only limited parts of scaffolding were allowed to touch the building, in order to prevent any damage to the masonry.

Loading restrictions were enforced around the site as well, due to the large number of historic caves under the grounds, which has further added to the logistical challenges of the project.

The scaffolding has been progressively removed over the course of eight months, with the northern temporary roof being taken down in June, the southern temporary roof removed in December and the last section located on the Colonnade at the end of January.

Once complete, the Ducal Palace will be home to brand-new Robin Hood and Rebellion galleries and a showcase of the Castle’s array of fine and decorative art collections. It will also feature interactive stations for archery enabling visitors to experience the Castle’s rich history in an interactive fashion. The Castle grounds will be remodelled and access to the impressive cave network hidden within the Castle rock will be improved. It is expected to attract around 350,000 visitors in its first year.

Richard Oldfield, project manager at G F Tomlinson said: “The removal of the scaffolding marks another major milestone in the redevelopment of Nottingham Castle. This is an iconic yet complex development, so each step forward is a major victory. The temporary works have been key for the overall development – if it was not for the scaffolding and temporary roof, the building would have been at great risk of damage from the weather, so the extensive works have been worthwhile.”

“The Ducal Palace forms a large part of the redevelopment works and G F Tomlinson is proud to be a part of its restoration, taking the historic building back to its original fabric to present it how it was 140 years ago, which is essential to bring the Castle back to its former glory and transform it into a world class visitor centre.”

Nottingham City Council portfolio holder for leisure and culture, Councillor Dave Trimble said: “The impressive scaffold wrapping the Castle for the last twelve months has been something of a landmark on the Nottingham skyline. Now works on the roof are complete, people will definitely notice its disappearance, marking a significant step towards finishing the transformation of the Castle as we move towards re-opening next year.”

Claire Kelliher-Smith, financial director at Empire Scaffolding said: “We are proud to be part of this historic restoration and demonstrate the versatility of the PLETTAC system, in which Empire Scaffolding has invested heavily in the past 18 months.”