Posted on March 21, 2020 Comments Off on Love Affair Enabled Mum To ‘Tap’ Into Dream Business 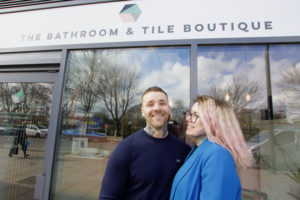 An entrepreneurial mum says she puts the success of her bathroom business down to meeting her “incredible” husband – setting her on an unexpected career path.

This month marks two years since Kirsty and Ben Cooke took the plunge and opened The Bathroom & Tile Boutique, in Liversage Street, Derby.

The couple have come a long way since the early days, when the firm was getting set up and they had to host business meetings on plastic garden furniture, boxes or on the street outside.

Now, they own a busy showroom that is a haven for style-savvy homeowners looking to snap up the latest trends in bathroom and kitchen couture – and have turned over £375,000 to date.
For Kirsty, who not only co-owns the firm with Ben, a tiler by trade, but is also a kitchen designer, her job is a dream come true.

Before meeting Ben, the 31-year-old, of Breaston, was PA to motivational speaker, Peter Sage.
Ben, 34, and Kirsty hit it off at the gym in 2013 and Kirsty’s passion for interiors and design was able to shine through when she helped Ben with his marketing and website.

Kirsty, who is mum to Junior, 10, then “fell into” a job as manager of a bathroom showroom.
But after a short while she felt limited in what she could do for clients, especially in the choice of products.

In 2016, she went to work at a more design-led showroom, in Stapleford, as branch manager.
She learned how to use computer-aided design and managed a team.

A trip to KBB, Europe’s leading kitchen, bathroom and bedroom design show, where she was “in her element”, cemented her determination to start a business.

Just three days after the show, she put down a deposit on her shop. The couple chose Derby as they saw a gap in the market in that area.

“It was an empty breeze-block building with no water or electricity”, recalls Kirsty.

“It took a massive family effort of myself, Ben, my father-in-law, who’s also a tiler, and my brother-in-law and friends putting in lots of late nights with pizza and beer to get the showroom ready on time.
We had nothing – I was meeting up with suppliers on garden furniture.”

“One day a supplier came and we had no option but to sit outside as it was too dusty inside.
Luckily it was a nice day!”

To add to the stress of setting up shop, the couple had just signed an exchange on their home, so they were spending what little spare time they had on doing up their new house. It took two-and-a-half months to complete the showroom, which is an “Aladdin’s cave” of bespoke kitchen and bathroom furnishings from high-end manufacturers including Graff, Artelinea and Kast. It also specialises in designer tiles, home saunas and steam cabins.

As for the future, Kirsty and Ben have signed a five-year lease.At the end of year three, they will consider either opening in a second city, or expanding in Derby, where they envisage an interior design area and potentially employing an interior designer.

Kirsty praised Ben, saying: “If it hadn’t been for meeting him, I may never have gotten the
bug for bathroom and kitchen design.

“Ben supports all of my crazy ideas and without his support, emotionally and financially, I just
couldn’t have done it. He’s incredible.”

To find out more, visit www.thebathroomandtileboutique.com