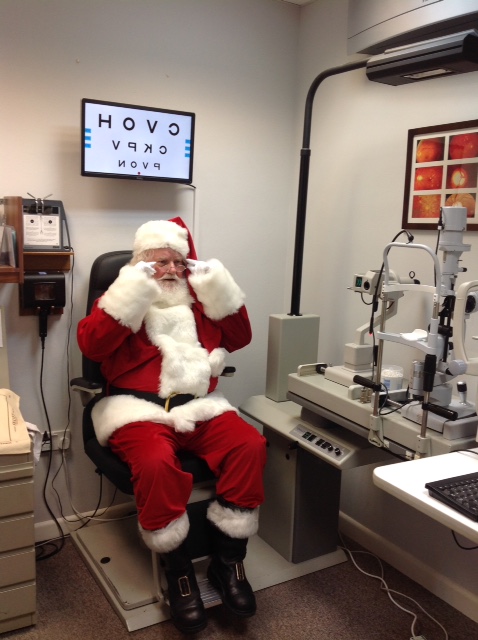 Lesley Cree Opticians were happy to announce their support for local patient Robert Coleman, in his role as Santa this Christmas, by providing him with a new pair of prescription glasses.

The Radcliffe-On-Trent local, who strikes an uncanny resemblance to Santa Claus, will be travelling around the UK this festive period dressed as the much-loved figure. 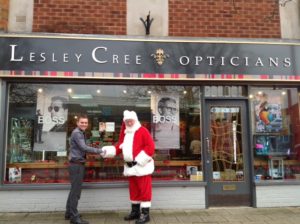 Among his stop off destinations, Mr Coleman will be present at a number of events over the festive period, which will include at Leicester Space Centre, Ashborne Chilli Gorge, Bluewater Shopping Centre and Express Star at Canary Wharf, finally finishing his tour at the Nottingham Ice Arena on the 21st December 2019.

Lesley Cree Opticians agreed to support Mr Coleman after a routine eye appointment revealed his secret as Santa. Mr Coleman revealed that he struggled to see properly when dressed up as Santa, due to using a pair of glasses that didn’t contain any prescription lenses.

It was this point that staff at Lesley Cree Opticians agreed to support Mr Coleman by providing him with a brand-new pair of circular framed Saville Row glasses, containing his correct prescription lenses, which were in keeping with his Santa Claus outfit.

Commenting on his new pair of glasses, Mr Coleman said “I can’t thank the staff at Lesley Cree Opticians enough for providing me with a new pair of glasses. Before, I couldn’t see at all really and had to “make do” with the glasses I had.”

Ben Cree, of Lesley Cree Opticians added, “When we heard of Roberts story and how he couldn’t see properly when performing his role as Santa, it was only natural that we lend a hand and supply him with a pair of prescription glasses. At the end of the day, Christmas is about giving, so it was our pleasure to help him out.”

Lesley Cree Opticians is a stylish, boutique-style, independent opticians based in Radcliffe on Trent which was opened in July 2012, by Lesley Cree. The practice is fully equipped with the latest technology, including a digital retinal camera, with the aim of spending quality time with patients and to offer an exceptional level of service.