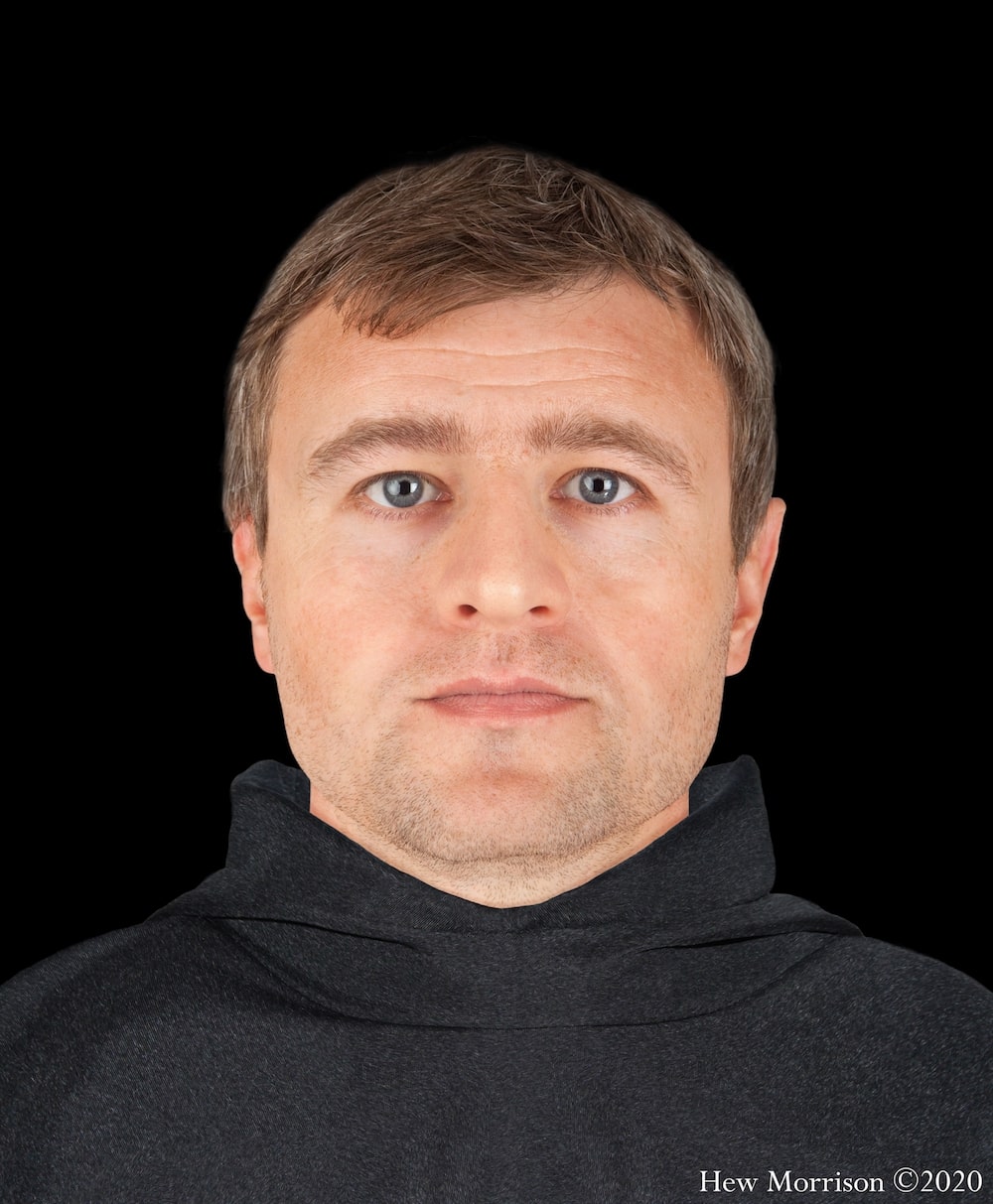 Posted on May 27, 2020 Comments Off on Facial reconstruction of Lincoln’s medieval priest

gives glimpse into the past

Archaeologists who unearthed a particularly rare medieval priestly burial earlier this year at Lincoln Cathedral have shared their findings and a facial reconstruction of the clergy member, enabling us to see what the priest looked like and giving us an insight into what life would have been like for him.

The priest’s burial was revealed by Lincoln-based Allen Archaeology Ltd during excavations – as part of the Lincoln Cathedral Connected project – to enable drainage works and landscaping around the cathedral, in the area that is now the building’s West Parvis.

Analysis of the skeleton has confirmed that the medieval priest was a male, and that he was approximately 169cm tall and died between the ages of 35 and 45 years old, but most likely in his late 30s.

Regarding the associated grave goods interred with him – a pewter chalice and paten which are key symbols of the work of a priest and used during communion – the report shows that these objects were plain in style, and similar examples have been dated back to as far as the 12th and 13th centuries.

Inverness-based forensic artist Hew Morrison, used Allen Archaeology’s findings and photographs of the skull, to build up a reconstruction of the priest’s face. The outcome looks like a real-life photo; enabling the people of Lincoln and Lincolnshire to come face to face with the medieval priest.

Forensic studies have shown that facial reconstruction techniques do not create an exact likeness, but a close representative image of a particular person that could be recognised by those who knew them. In this instance, without the availability of DNA testing, the colour of the hair and eyes etc. are conjectural, but the features of the priest’s skull – his close-set eyes and slightly asymmetrical chin – plus his estimated age at the time of death, are factual information that form the basis for facial reconstruction.

From the bone report, a number of interesting and unusual traits were found on the rest of the priest’s body. There was little sign in the skeleton that he had suffered from any disease or injury during his life, with the exception of a small lump resulting from deep tissue bruising and small deposits of mineralised dental plaque.

Hypoplasia (underdevelopment of tissue) which was seen in a neck vertebra, may have been associated with asymmetry of the blood vessels, but whilst this has been shown to increase predisposition to certain types of stroke, it is not possible to conclude that the priest had any associated symptoms.

The degeneration of the discs of his lower spine show that the priest was involved in some level of physical activity, and are within the changes that would be expected to have occurred with age. His remains suggest that he was apparently well nourished and had a relatively risk-free lifestyle.

The Revd Canon, John Patrick, Subdean of Lincoln, said: “These excavation findings are truly captivating and the historical insights we gain are testament to the rich history of the religious site. This burial was one of many significant objects discovered during renovation works and we look forward to being able to see many of these treasures in the new visitor centre.

“The whole cathedral team and I hope everyone is keeping well in these unprecedented times and we are eager to welcome people back to the cathedral once government lockdown measures are lifted.”

During this excavation, a host of other fascinating historic artefacts were unearthed which are currently being studied and dated. It is planned that some will be displayed as part of the new Lincoln Cathedral visitor centre, which is currently under construction due to complete later this year.

Senior manager at Allen Archaeology, Natasha Powers, said: “This burial is just one of the fascinating discoveries that our team has made during the Cathedral Connected project. We have revealed new evidence of Roman, Saxon, medieval, Tudor and Victorian activity within the site, and full analysis of the 50 or so burials that have been unearthed will provide us with a window into understanding the lives of the medieval population of Lincoln.”

The National Lottery-funded Connected project includes the delivery of vital restoration and renovation works to the iconic Lincoln Cathedral which are due to complete in 2022. The works will provide new spaces for all to enjoy, including a new visitor centre, and will help to protect and safeguard the cathedral for generations to come.