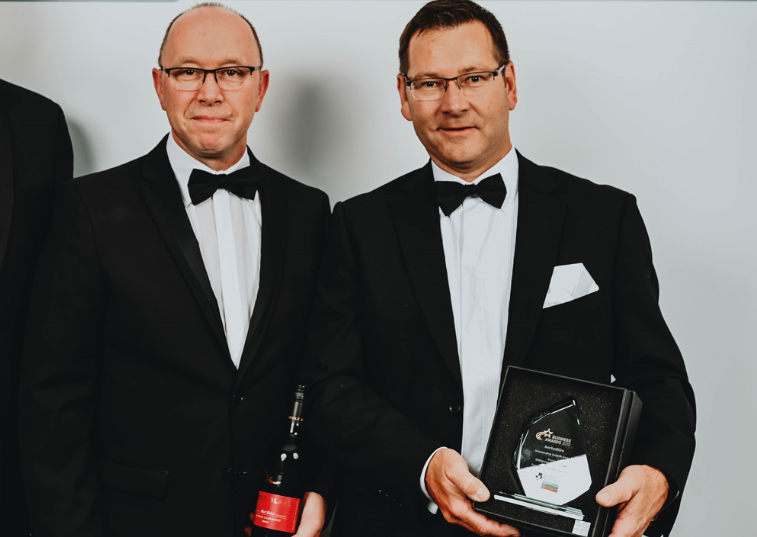 Posted on October 4, 2019 Comments Off on Derbyshire firm Wildgoose Construction is celebrating after winning a prestigious countywide award.

The Alfreton based company picked up the Outstanding Growth Award at the East Midlands Chamber Derbyshire Business Awards.

Jonathan Wildgoose, Executive Chairman of Wildgoose Construction, said he was thrilled for everyone at the firm.

He said: “2019 will realise a record year for Wildgoose, taking our order book to £67m by developing client relationships and consolidating enquires to secure a number of new and exciting projects.

“We have invested in staff development, digital technology and encourage original thinking to drive innovation to generate real improvements of the service we provide and we are thrilled that our ‘outstanding growth’ has been recognised.”

The Chamber award follows on from a RoSPA Gold award which Wildgoose won earlier this year. The RoSPA Awards scheme, which receives entries from organisations around the world, recognises achievement in health and safety management systems, including practices such as leadership and workforce involvement.

Earlier this year the firm further strengthened its board of directors with the appointment of Andrew Tilford as Commercial Director. Mr Tilford has taken charge of business development, estimating, buying and commercial teams at Wildgoose. Alongside Mr Tilford’s appointment, Managing Estimator and Pre-Construction Manager, Richard Hubball, was promoted to Estimating Director.

Wildgoose has also started work on the site of an £11m contract to build homes in Matlock, where the firm was founded.

The firm has begun building the first phase of the Matlock Spa development, which will ultimately see 494 homes built on the site of the disused Cawdor Quarry, off Matlock Spa Road, on the edge of Matlock.

The first phase will see 15 houses and 38 apartments, in three blocks, built alongside retail space. The houses are due for completion by spring 2020 and the apartments by summer 2020 and the scheme is for David Morley Architects, London.

For more information or to arrange an interview contact Nicola Allen at Allen PR on 07896 305059.