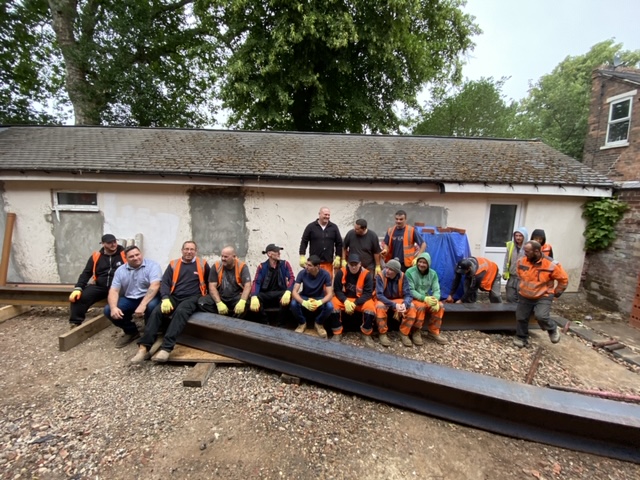 Posted on September 14, 2020 Comments Off on Demolition Firm Helps Build Up Community Relations With Muscle Power at Sikh Temple

Leaders of a Sikh temple have thanked a demolition firm for coming to the rescue and providing “muscle power” to help ensure their building project went ahead without a hitch.

The Sri Guru Teg Bahadur Gurdwara, a Sikh temple in Church Street, Lenton, Nottingham, is two months into a six-month renovation that involves an extension to its langar hall, which is a community kitchen.

The 100 sq m rear courtyard extension will also provide extra space for the temple’s 200 members to do activities like Punjabi and Yoga classes.

Members of the temple were left in a quandary when four heavy steel beams required for the work were left at the front of the building, but needed to be shifted to the back.

At six metres long and half a metre wide – with one weighing half a ton – moving the structures 40 metres to the rear was not going to be an easy feat.

But after Gurdwara president Gurmeet Singh mentioned the problem to his friend of 30 years, Melvyn Cross Junior, a joint owner at Hucknall-based Total Reclaims Demolition, Melvyn did not hesitate to get his staff involved.

Narinder Michael Singh, a member of the temple’s project management team, which also includes Sinder Singh and Marshall Singh, said: “We looked at all the options, including getting a crane, but it wasn’t possible down the alleyway.

“The actual help that Melvyn gave was absolutely amazing. One morning at 7.30am, six vans pulled up and 18 of his employees came and lifted these very heavy steel structures and rolled them to the back, using a method like the Egyptians used, with steel rollers.

“They also used Genie machines, which are like fork lift truck, to move the beams once at the back of the building.

“It was a major operation and it saved us thousands of pounds as we would have had to move the telegraph poles and close the road for the crane. It’s absolutely fantastic that a local company was able to help us like this, and free of charge.

“Amazingly, they did the whole operation within an hour. Total Reclaims Demolition did us a massive favour. We are very grateful for their support and we wish them all the best for the future in these difficult times.”

The temple was first established in the building in 1975 and prior to that it was a National School built in 1841 and designed by Derby architect Henry Isaac Stevens.

The temple, which provides a free kitchen for the homeless every Thursday, previously had a major refurbishment 10 years ago, aided by English Heritage, in which some double hammer beams – which are of significant architectural importance – were uncovered.

Melvyn Cross Junior, of Total Reclaims Demolition, which has been Nottingham’s leading demolition contractor since 1993, said: “When I heard about the plight of the members of the temple from my friend Gurmeet, I couldn’t just walk away.

“We always try our best to help the local community, and as this was such a worthy cause that supports local people with food and activities, it was only right that our staff should get involved.

“It was a pleasure to be able to offer help and ensure the work went ahead.”

To find out more, visit www.totalreclaims.com