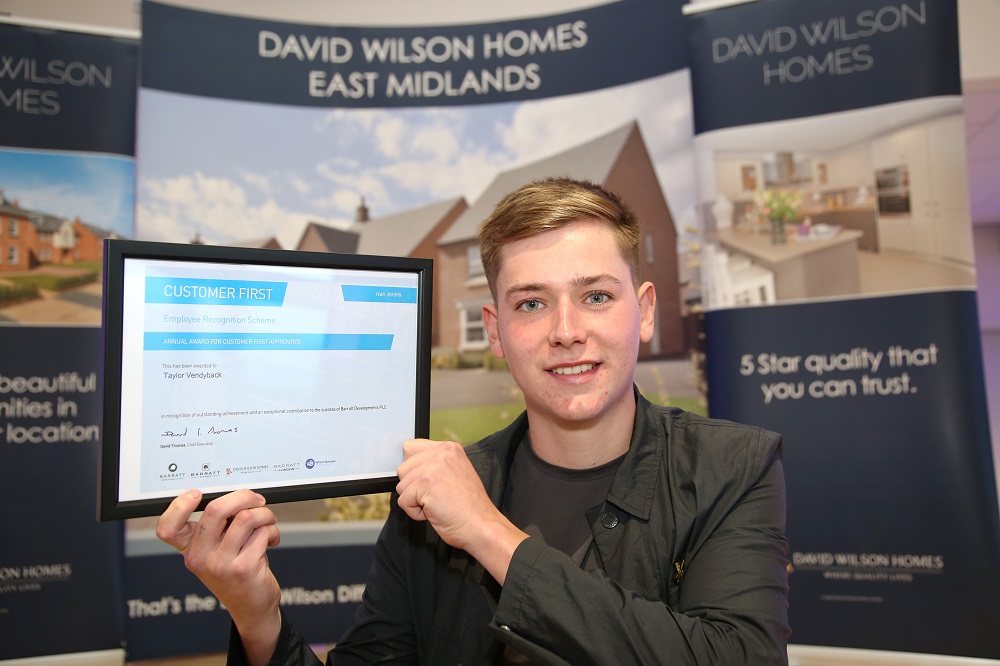 A bricklaying trainee in Leicestershire has claimed the title of Apprentice of the Year following his work at David Wilson Homes’ Wigston Meadows development. 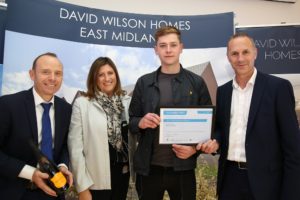 Taylor Vendyback (18) was given a Customer First annual award by parent company Barratt Developments PLC for his work at the East Midlands division’s Newton Lane development in Wigston.

He has earned the coveted award following the progression shown since first learning the trade at the leading developer’s Forest Chase development in Leicester Forest East.

Taylor said: “It’s amazing to have been named Apprentice of the Year and I wasn’t expecting it at all.”

He lives with his family in a David Wilson property in Leicester Forest East, and is currently working towards a Level 3 Diploma in Bricklaying at South Leicestershire College.

Taylor added: “I wouldn’t have won without the help of my workmates at Wigston Meadows and I appreciate the support they’ve given me since I started.

“The development is coming on well and I’m enjoying my work just as much as I was when I began my apprenticeship at Forest Chase.”

Taylor was nominated for Apprentice of the Year by his Site Manager at Wigston Meadows, Henry Patecki.

Henry recently picked up his 17th award having won Pride in the Job, Seal of Excellence and the widely-renowned Supreme awards from the National House Building Council (NHBC).

Taylor’s skills are therefore growing whilst under the wing of a vastly experienced site team.

Henry said: “Taylor has been an asset to the David Wilson Homes team since he joined the division, and he has certainly earned this recognition.

“Having worked with him at Forest Chase and Wigston Meadows, it’s been great to see him grow in his trade.”

Looking ahead to the future, Taylor has expressed his desire to qualify as a bricklayer and build his own business further down the line.

John Reddington, Managing Director at David Wilson Homes East Midlands, said: “We are thrilled with how Taylor has progressed since he started in 2017 and he thoroughly deserves the title of Apprentice of the Year.

“As a leading housebuilder in Leicestershire, we pride ourselves on not only providing a first-class service for our customers, but also ensuring we look after our staff and provide opportunities to progress within the company and achieve their ambitions.”

For further information on any developments nearby, please call the David Wilson Homes sales team on 033 3355 8483 or visit www.dwh.co.uk.